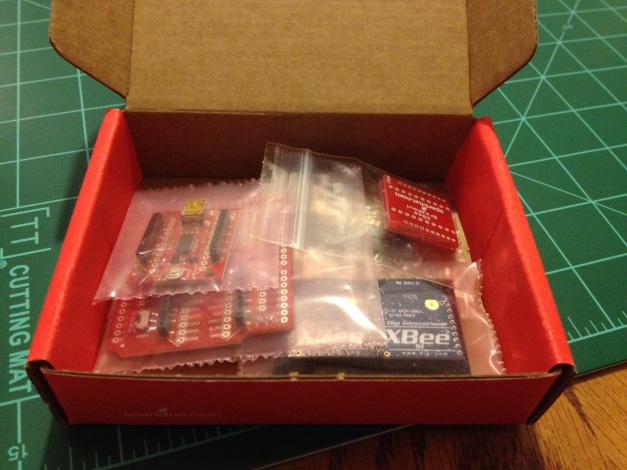 Any day with a box full of new toys from Sparkfun is a good day.

So I have an Arduino-powered robot, and I have a Commodore 64 with an RS-232 interface.  How am I going to make these two things talk to each other?  The answer – assuming this project actually works by the time I’m done with it – is the XBee.  The XBee is a small wireless communications module with an RS-232 interface.  According to the documentation, I should be able to attach one XBee module to the RS-232 interface on the C64 and another to the serial interface on the Arduino, and they’ll talk to each other just as if they were connected by a serial cable.

That’s the theory, at least.  First I’ve got to put together all the bits and pieces and figure out how to connect them.  The box of goodies I ordered contained two XBee modules and several things to attach them to: 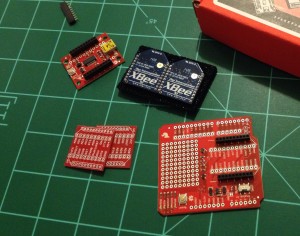 Both the shield and the breakout board came without headers installed, so it was time to break out the old soldering iron.  I’m still not very good at soldering – I don’t practice nearly enough – but I think everything turned out okay.  The 2mm headers on the breakout board were the trickiest part, because that is awfully tiny.  I actually bought two breakout boards in case I messed one up, because they’re cheap.  The results look okay in the magnifying glass, so we’ll see what happens when I’ve got the actual circuit together. 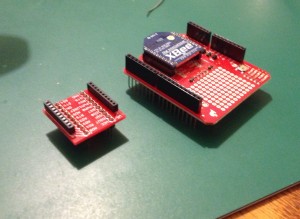 Breakout board and shield with all headers soldered into place.

So far I’ve only done a very basic test connecting an Arduino to my PC, but the XBees worked just like they were supposed to.  I think that’s a good sign.  The next step will be to hook up the C64 side.