But is it music?

This week’s project is a followup to my post last week about using 555 timer ICs.  I was working through the examples in the Make: Electronics book – Experiment 17, in particular, which introduces the “astable” mode of the 555, where it basically functions as an oscillator.  That reminded me of an idea I saw online for a “Light Theramin” – a sort of musical instrument controlled by light.  The frequency of sound from the light Theramin increases with the amount of light falling on the detectors, giving it that quavering, continuously changing sound that’s reminiscent of a real Theramin.  After a half hour of improvising with different components, I ended up with the circuit in the video:

The concept here is pretty simple.  The 555 generates the basic tone, controlled by the resistors and capacitor connected to its Discharge and Threshold pins.  I added a couple photoresistors in series with the resistance load.  I’ve used these before – the resistance varies with the amount of light hitting the surface.  Changing the resistance changes how fast the capacitor charges, with changes the frequency of the 555’s output.

I also kept the right-hand portion of the circuit from Experiment 17, which sets up a second 555 timer hooked up to the Control pin of the first one.  The second 555 is a slower oscillator, with a button to turn it on and off.  The result is to create a siren-line “weee-oooh-wee-oooh” sound.  I added a red LED on the second 555’s output to highlight the effect.

The fun part of this circuit, for me, was the improvisation and trial and error of getting a good result.  Yes, if you wanted to you could calculate out all the values to get the frequency range you wanted, but going into the project I didn’t know specifically what I wanted beyond a cool noisemaker.  So instead I experimented with different values.  First, I wanted a lower base frequency, so I increased the resistance so the capacitor would charge more slowly.  Then I was concerned that the constant resistance would minimize the impact of the resistance change from the photoresistors, so I went with a different-sized capacitor instead. 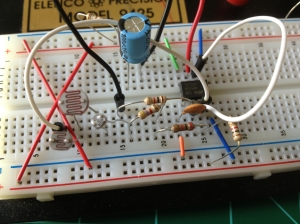 This messy circuit is a lot simpler than it looks, but that’s the price of building by trial and error. Building things for fun means you don’t have to clean up the design when you’re done.

At first, I only used one photoresistor, but that didn’t seem to give me very much range.  In the end, I put 3 photoresistors in series, which I figured would have an additive effect, and it seemed to do the trick.  Taking a close up of my breadboard, though, you can really see that this circuit was evolved rather than designed.  That mess of resistors and photoresistors is a lot simpler than it looks!  Then again, it also got built on top of and overlapping the Control input coming from the second 555 timer, and even the lines I used to connect my power and ground rails.  If I were still in school, I’d expect to get docked points for that kind of shoddy construction.  But for hobby work, it does the job.

There’s one other thing about this circuit, which is still puzzling me.  When I built the original version of the circuit in the book, I put the speaker in series with a 100Ω resistor to limit the current – but when I tried it out, I didn’t get any sound out of the speaker except for a quiet click when I powered up the circuit.  I’m not the only one to experience that, but I still haven’t found an explanation that completely satisfies me.  The solutions I’ve found online put a capacitor in series with the speaker, and that seems to do the trick (100 μF worked well for me).  I also found that swapping out my 100Ω resistor for 180Ω works, but I can’t explain exactly why.  I suspect that would become clear if I had an oscilloscope, but those are pretty expensive as toys go.

Playing with microcontrollers like Arduino is fun, but I’ve still got a lot to learn, or re-learn, about electronics.  I’m continuing to make my way through Charles Platt’s Make: Electronics book, where the last couple experiments I’ve worked on have involved the 555 timer chip.

If you look around on the web, you’ll see that electronics hobbyists have an interesting kind of relationship with this particular IC.  For example, they build giant 555 replicas to use as piano benches and footstools.  It’s a little like the way role-playing gamers treat their 20-sided dice – part tool, part symbol.

There’s a reason for that – this little 8-pin chip is pretty versatile.  At its core, the 555 is a kind of flip-flop.  It has two inputs (trigger and reset), and a single output that is either on or off.  You hook up various resistors and capacitors to the remaining pins to control the behavior.  Experiment 18 in Make: Electronics really highlights its flexibility – each of the 3 555s operates in a different mode providing a distinct behavior.

The project is a “reflex timer”.  The idea is that you press the start button, and then wait.  A few seconds later, an LED turns on, and a 3-digit timer starts counting.  The test is to press the stop button as quickly as you can once the LED lights up.  The counter ought to be set up to count in milliseconds, but I left mine running at a more sedate 4Hz or so because it was easier to see what was happening in the video.

The first 555 timer is configured to use its “monostable” mode.  In this mode, the output is usually off.  The start button is hooked up to the 555’s trigger, and when it is pressed the 555 output emits a pulse that lasts for several seconds.  The duration of the pulse is controlled by a capacitor and resistor – the pulse lasts until the capacitor discharges down to 1/3 of the circuit’s input voltage.  Using a capacitor and resistor like this will be familiar from the oscillator project from a while back.

The second timer starts and stops the clock, and uses “bistable” mode.  In this mode, the 555 can be switched off by a signal on its reset pin, and switched on by a signal to its trigger pin.  It stays on or off until the next signal.  In this case, the end of the pulse from the first timer signals the second one’s reset pin (turning it off), and the stop button signals the trigger (turning it on).

That probably sounds backwards, doesn’t it?  That’s because the chips that are storing the count have a “clock disable” input.  To start the clock, we turn off the disable input, and to stop it again, we turn the disable back on.  That kind of thing happens a lot in electronics.  Luckily, as a software guy, boolean algebra is one thing I’ve got down cold.

The final 555 timer is used to update the clock.  It uses “astable” mode, where the 555 basically feeds back into its own trigger input.  The result is an oscillator that runs at a steady frequency controlled by the resistors and capacitors it uses.  Every time it switches on, the clock advances by one.

So how does the clock itself work?  It uses a trio of 4026 decade counter chips.  Each one of these ICs can count from 0 to 9.  It has an input, which advances the clock by one, and a “carry” output that is triggered when the count wraps around from 9 back to 0.  By connecting the carry of one counter to the input of the next, you can have one chip control the 1’s digit, the next control the 10’s, and the last control the 100’s digit of a 3-digit number.

The other neat thing about these counter chips is that they have outputs designed to be hooked up to a “seven-segment” display, like you might see on an alarm clock or a microwave oven.  In this case I’m using one component that has 3 seven-segment displays, but each one is controlled individually.  The display is really just a bunch of LEDs, but by turning them on and off in a particular pattern you end up with a numeric display.  Honestly, it’s fun just to watch it count up from 0 to 999.

This experiment was a really fun project for me, because I appreciate having such a cool output as the numeric display.  It was also a fun challenge to get it working correctly.  For one thing, it’s a really tight fit to get those components on a single breadboard, and it was tricky to get my fingers into some of those spaces between parts.  There’s a lot of connections that have to be made to get this all running correctly.  Also, I went through the construction of the circuit in stages, as described in the book.  Several times, there was some interim circuitry that had to be modified or removed to make way for the next stage, and everything had to be diligently checked to make sure everything was hooked up the right way.

The worst part of doing a project like this on a breadboard?  Knowing that you’re going to have to tear it all apart to make way for the next project!