The trouble with Dead Reckoning

Posted by coronax on February 17, 2013
Posted in: Electronics. Tagged: Arduino, Board of Education, BOEBot, dead reckoning. Leave a comment

If you’re a software person, sometimes it can seem like hardware is the source of all the world’s problems.  Take, for example, the problem of getting a robot to navigate by dead reckoning.

In a software world, dead reckoning like that works really well.  I once wrote a set of virtual reality programs for Iowa State’s C6 that included some “virtual robots” that used the technique.  In software, you can program in a complex set of maneuvers, but the robot will always know its correct position and orientation.

You’ll often see dead reckoning techniques used in networked software – multiplayer games and so forth – to animate the avatars of remote players.  The software thinks, “This character was going in such-and-such direction at such-and-such speed, so we’ll keep doing that until we get another update.”  If the updates are laggy and the implementation not very sophisticated, you might see a character jump from place to place while moving, as the software corrects from its dead-reckoning guess about where the character is to the “actual” position received across the network.  The stream of updates means that there’s no accumulation of error beyond the next update.

Using dead reckoning in the real world can be trickier, as I’ve seen with the BoE-Bot robot.  I’ve been skimming through the online tutorials (they started with a lot of basic Arduino programming that I didn’t need), and the first substantive examples use dead reckoning techniques to move the robot around.  This is trickier than it sounds, for a variety of reasons.

The first reason is the servos that drive the wheels.  Each of the servos is controlled by a digital pin on the Arduino. But it’s not just an on-or-off signal.  The control signal is a pulse on that line, and the duration of that pulse tells the servo which direction to spin in, and how fast to spin.  For example, a pulse lasting 1500 μs tells the servo to stay still (if it’s properly calibrated).  In my testing so far, I’ve been using values between 1400 and 1600 μs, because that’s the range where the response is fairly linear.

I say “fairly” linear because it’s an analog world out there.  The servo response is really a curve, and the curve isn’t exactly symmetrical.  Also, the two physical servos have slightly different response curves.  It’s also possible that the strength of the robot’s batteries will affect performance, but I haven’t measured by how much.

Then there’s the environment.  I don’t have a lot of large flat surfaces in my apartment.  I don’t want the robot driving on tabletops until it’s smart enough not to drive off the edge.  The kitchen linoleum has a square pattern to it that can catch wheels.  The carpet is unpredictable and makes turning more difficult.  All very tricky.

The last and worst problem with dead reckoning in the real world is that error accumulates.  With no sensors hooked up (yet), the robot is driving blind, so there’s no way to receive a correction to the calculated position.  With each movement and each turn, the gap between where the robot is, and where it thinks it is, changes.  Orientation errors are especially pernicious – if the robot turns just 85° instead of 90°, it can quickly find itself wildly off course.

Still, I felt like I wanted at least a basic demonstration, so I did a few things to try to make the dead reckoning performance of the robot more predictable.  For example, I rewrote the subroutines for my individual maneuvers so that they gradually get the wheels up to speed, instead of just setting a flat value for a set period of time.  Whether that actually helped or not, I’m undecided.

I also took advantage of the breadboard space on top of the BoE-Bot to add a pair of buttons to increment and decrement the amount of turning.  That way I could adjust the turns on-the-fly, without bringing the robot back to the computer to reprogram it.  This helped a lot, though I still had to do some manual adjustments because my left turns seem overall to be faster than my right turns.

Generally, I found that the robot’s right wheel moves slightly faster than its left, when both are set to the same value.  Ultimately, I think I’m going to need some kind of speed mapping function in order to get really reliable navigation.  As it is, the robot skews slightly to the left during its straightaways, and I adjusted the turns to compensate for that.

The video shows the robot performing a squared-off figure-eight driving pattern, using both left and right turns.  It’s never going to be perfect – the orientation accumulates a little bit of error with each turn – but for one lap it returns the robot pretty close to its starting point.

If you look closely, you can see that I’ve added the “whiskers” to the front of the robot.  They aren’t hooked up to any code yet, but I’m definitely ready to doing something with a little more feedback involved than this simple dead reckoning exercise.

Posted by coronax on February 10, 2013
Posted in: Electronics. Tagged: Arduino, Board of Education, BOEBot, Robot. Leave a comment

The BOEBot robot kit, assembled and ready to roll out.

I said last week that I wanted to switch gears for a bit and work on a few projects that I’ve been neglecting while I focused on the Project:65 computer.  First on that list is this cool little robot kit I picked up from Adafruit a couple of months ago.  It’s the Parallax Board of Education (BoE) kit for Arduino.  I chose this kit for my first foray into robotics because it included everything I needed (except the Arduino itself) and because it came with an extensive set of tutorials.  Since I don’t know anything about how to control servo motors, it seemed like a good place to start.

One of the things I love about any kind of kit is that first moment of unpacking it and checking out all the cool pieces.

The main idea for this kit is that you use an  Arduino as the brains of the robot.  It’s connected to the BoE shield, which attaches to the frame of the robot.  In a lot of ways, the BoE shield is just a bigger-than-normal Arduino shield.  It provides access to all the Arduino’s IO pins, and has a little breadboard area in front for hooking up sensors and stuff.

The shield’s most important job is to drive the servos that control the robot’s wheels.  You can’t drive a servo motor very well using the Arduino directly, because it just can’t provide enough juice.  You’ll notice the bigger voltage regulator and heat sink in the center of the BoE shield, which will provide the extra power.  The whole thing runs off 5 AA batteries nestled underneath the main body.

For the most part, the robot went together very easily.  The hardest part was early on, when I was attaching the Arduino to the BoE shield.  The kit includes some screws and plastic (nylon?) spacers to secure the two pieces.  With the Arduino Uno I’m using, that proved to be a really tight fit, and I had to trim down one of the spacers so that it would fit next to the Arduino’s headers.  I believe older Arduino models had a shorter header in that spot, which wouldn’t have gotten in the way.

The BoE Shield. You can see the Arduino poking out under the left side.

Friendly reminder, kids: wear your safety glasses when you’re doing something like that.  The spacer was very hard plastic, and I actually snapped the blade on my X-acto knife trying to cut through it.

Afterwards, I decided that I probably would have been just as well off leaving the spacer out, but sometimes solving the problem is more important than deciding whether it needs to be solved or not.  One thing’s for sure – that Arduino isn’t coming out of that robot any time soon.

With the Arduino and shield attached, I was able to plug in the servos, apply some power, and do some calibration.  Each of the servo motors has a little calibration screw which is easier to get at before assembling the rest of the robot.  The idea is just to adjust it slightly so that when the Arduino is telling the motor to stay put, it does, instead of turning really slowly in one direction or the other.  Both of my servos were pretty close right out of the box, so with a slight adjustment I was ready to go. 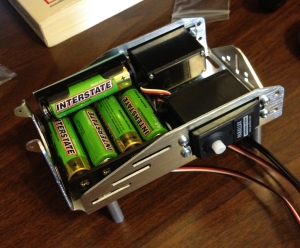 The underside of the chassis, with the servos and battery box in place.

The rest of the assembly reminded me of playing with an Erector set, except easier.  Of course, the Erector set I had as a kid was a hand me down from my Mom that had seen better days.  By comparison, this project featured much lower risks of either electrocution or Tetanus.  I definitely appreciate the steel chassis, and especially the fact that it has a lot of convenient-looking attachment points for… well, I guess we’ll see what they can be useful for.

There’s a picture of the completed build up at the top.  It’s a cute little thing with two powered wheels and a freely-rotating wheel at the back.  It’s not tremendously fast, but hopefully that will translate into accurate movement.  Now as far as controlling it, I’m going to start in on the tutorials and see how far they go, and then see if I can get it to do something interesting.  You can expect to hear more about it in the future – either when I’ve got it doing something cool, or if I need to vent about something not working the way I want.